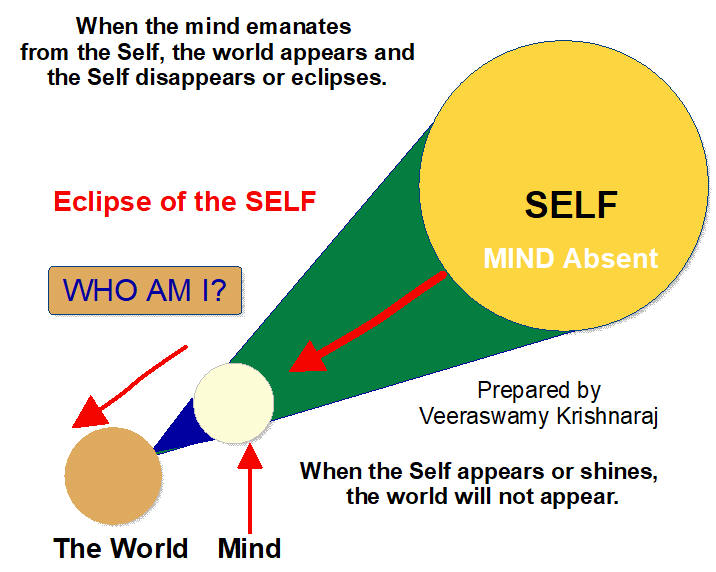 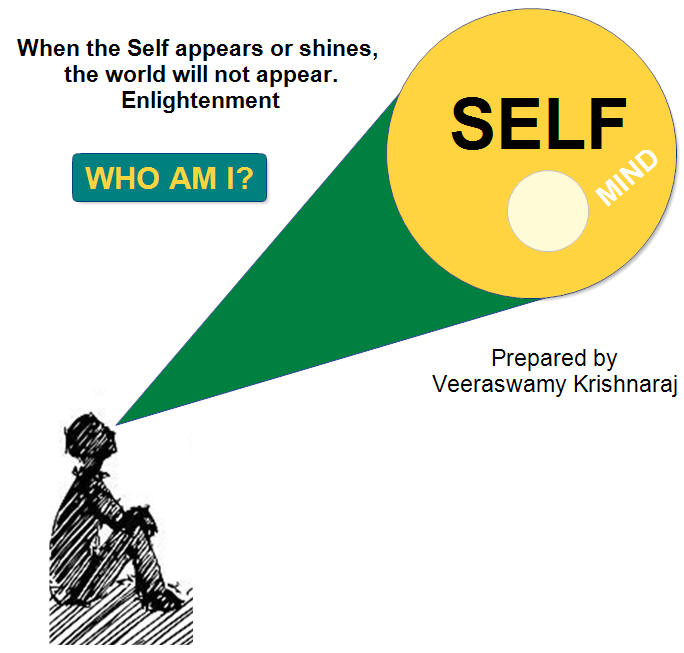 Introduction
“Who am I?” is the title given to a set of questions and answers bearing on Self-enquiry. The
questions were put to Bhagavan Sri Ramana Maharshi by one Sri M. Sivaprakasam Pillai about
the year 1902. Sri Pillai, a graduate in Philosophy, was at the time employed in the Revenue
Department of the South Arcot Collectorate. During his visit to Tiruvannamalai in 1902 on official
work, he went to Virupaksha Cave on Arunachala Hill and met the Master there. He sought from
him spiritual guidance, and solicited answers to questions relating to Self-enquiry. As Bhagavan
was not talking then, not because of any vow he had taken, but because he did not have the
inclination to talk, he answered the questions put to him by gestures, and when these were not
understood, by writing. As recollected and recorded by Sri Sivaprakasam Pillai, there were
fourteen questions with answers to them given by Bhagavan. This record was first published by
Sri Pillai in 1923, along with a couple of poems composed by himself relating how Bhagavan’s
grace operated in his case by dispelling his doubts and by saving him from a crisis in life. ‘Who
am I?’ has been published several times subsequently. We find thirty questions and answers in
some editions and twenty-eight in others. There is also another published version in which the
questions are not given, and the teachings are rearranged in the form of an essay. The extant
English translation is of this essay. The present rendering is of the text in the form of twenty-eight
questions and answers.
Along with Vicharasangraham (Self-Enquiry), Nan Yar (Who am I?) constitutes the first set of
instructions in the Master’s own words. These two are the only prose pieces among Bhagavan’s
Works. They clearly set forth the central teaching that the direct path to liberation is Self-enquiry.
The particular mode in which the enquiry is to be made is lucidly set forth in Nan Yar. The mind
consists of thoughts. The ‘I’ thought is the first to arise in the mind. When the enquiry ‘ Who am I?’
is persistently pursued, all other thoughts get destroyed, and finally the ‘I’ thought itself vanishes
leaving the supreme non-dual Self alone. The false identification of the Self with the phenomena
of non-self such as the body and mind thus ends, and there is illumination, Sakshatkara. The process
of enquiry of course, is not an easy one. As one enquires ‘Who am I?’, other thoughts will arise;
but as these arise, one should not yield to them by following them , on the contrary, one should ask
‘To whom do they arise ?’ In order to do this, one has to be extremely vigilant. Through constant
enquiry one should make the mind stay in its source, without allowing it to wander away and get
lost in the mazes of thought created by itself. All other disciplines such as breath-control and
meditation on the forms of God should be regarded as auxiliary practices. They are useful in so far
as they help the mind to become quiescent and one-pointed.
For the mind that has gained skill in concentration, Self-enquiry becomes comparatively easy. It is by
ceaseless enquiry that the thoughts are destroyed and the Self realized - the plenary Reality in which
there is not even the ‘I’ thought, the experience which is referred to as “Silence”.
This, in substance, is Bhagavan Sri Ramana Maharshi’s teaching in Nan Yar (Who am I?).
University of Madras - June 30, 1982
Om Namo Bhagavathe Sri Ramanaya

Who Am I?
(Nan Yar?)
As all living beings desire to be happy always, without misery, as in the case of everyone there
is observed supreme love for one’s self, and as happiness alone is the cause for love, in order to
gain that happiness which is one’s nature and which is experienced in the state of deep sleep
where there is no mind, one should know one’s self. For that, the path of knowledge, the inquiry
of the form “Who am I?”, is the principal means.
1. Who am I ?
The gross body which is composed of the seven humours (dhatus), I am not; the five cognitive
sense organs, viz. the senses of hearing, touch, sight, taste, and smell, which apprehend their
respective objects, viz. sound, touch, colour, taste, and odour, I am not; the five cognitive sense organs,
viz. the organs of speech, locomotion, grasping, excretion, and procreation, which have as
their respective functions speaking, moving, grasping, excreting, and enjoying, I am not; the five
vital airs, prana, etc., which perform respectively the five functions of in-breathing, etc., I am not;
even the mind which thinks, I am not; the nescience too, which is endowed only with the residual
impressions of objects, and in which there are no objects and no functionings, I am not.
2. If I am none of these, then who am I?
After negating all of the above-mentioned as ‘not this’, ‘not this’, that Awareness which alone
remains - that I am.
3. What is the nature of Awareness?
The nature of Awareness is existence-consciousness-bliss
4. When will the realization of the Self be gained?
When the world which is what-is-seen has been removed, there will be realization of the Self
which is the seer.
5. Will there not be realization of the Self even while the world is there (taken as real)?
There will not be.
6. Why?
The seer and the object seen are like the rope and the snake. Just as the knowledge of the rope
which is the substrate will not arise unless the false knowledge of the illusory serpent goes, so the
realization of the Self which is the substrate will not be gained unless the belief that the world is
real is removed.
7. When will the world which is the object seen be removed?
When the mind, which is the cause of all cognition’s and of all actions, becomes quiescent, the
world will disappear.
8. What is the nature of the mind?
What is called ‘mind’ is a wondrous power residing in the Self. It causes all thoughts to arise.
Apart from thoughts, there is no such thing as mind. Therefore, thought is the nature of mind. Apart
from thoughts, there is no independent entity called the world. In deep sleep there are no thoughts,
and there is no world. In the states of waking and dream, there are thoughts, and there is a world
also. Just as the spider emits the thread (of the web) out of itself and again withdraws it into itself,
likewise the mind projects the world out of itself and again resolves it into itself. When the mind
comes out of the Self, the world appears. Therefore, when the world appears (to be real), the Self
does not appear; and when the Self appears (shines) the world does not appear. When one
persistently inquires into the nature of the mind, the mind will end leaving the Self (as the residue).
What is referred to as the Self is the Atman. The mind always exists only in dependence on
something gross; it cannot stay alone. It is the mind that is called the subtle body or the soul (jiva). 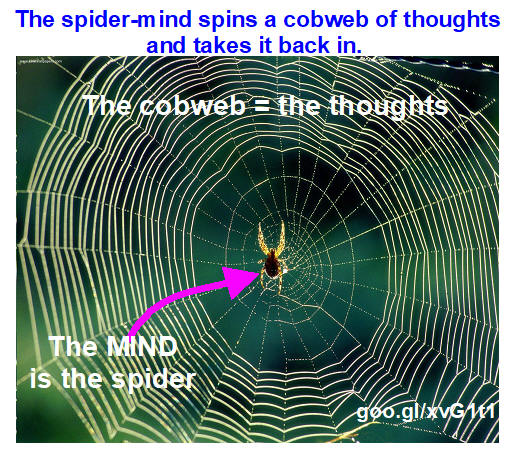 Who am I?  By Ramana Maharishi