IN THE ANCIENT LANGUAGE OF THE BRAHMAN

OF THE THREE GUṆAS OR QUALITIES

LECTURE XIV.
OF THE THREE GUṆAS OR QUALITIES (The mystical Father of All Beings-Dr. Radhakrishnan)


KRISHNA
I will now reveal unto thee a most sublime knowledge, superior to all others, which having learnt, all the Munis have passed from it to supreme perfection. They take sanctuary under this wisdom, and, being arrived to that virtue which is similar to my own, they are not disturbed on the day of the confusion of all born again on their renovation.

The great Brahma (Prakṛti) is my womb. In it I place my fetus; and from it is the production of all nature. The great Brahma is the womb of all those various forms which are conceived in every natural womb, and I am the father who soweth the seed.
There are three Guṇas or qualities arising from Prakṛti or nature: Sattva truth, Rajass passion, and Tamas
darkness; and each of them confineth the incorruptible spirit in the body. The Sattva-Guṇa, because of its purity, is clear and free from defect, and entwined the soul

with sweet and pleasant consequences, and the fruit of wisdom. The Rajassa Guṇa is of a passionate nature, arising from the effects of worldly thirst, and imprisoneth the soul with the consequences produced from action. The Tamas Guṇa is the offspring of ignorance, and the confounder of all the faculties of the mind; and- it imprisoneth the soul with.intoxication, sloth, and idleness. The Sattva Guṇa prevaileth in felicity, the Ra jas in action, and the Tamas, having possessed the soul, prevaileth in intoxiation. When the Tamas, and the Rajas have been overcome, then the Sattva appeareth; when the Rajas and the Sattva, the Tama; and when the Tama and the Sattva the Rajas. When Jñāna or wisdom, shall become evident in this body at all its gates, then shall it be known that the Sattva-Guṇa is prevalent within. The love of gain, industry, and the commencement of works; intemperance, and inordinate desire, are produced from the prevalence of the Rajas Guṇa; whilst the tokens of the Tamas-Guṇa are gloominess, idleness, sluggishness, and distraction of thought. When the body is dissolved whilst the Sattva-Guṇa prevaileth, the soul proceedeth to the regions of those immaculate beings who are acquainted with the Most High. When the body findeth dissolution whilst the Rajas-Guṇa is predominant, the soul is born

again amongst those. who are attached to the fruits of their actions. So, in like manner, should the body be dissolved while the Tama-Guṇa is prevalent, the spirit is conceived again in the wombs of irrational beings. The fruit of good works is called pure and holy;. the fruit of the Rāja-Guṇa is pain; and the fruit of the Tama-Guṇa is ignorance. From the Sattva is produced wisdom, from the Rajas covetousness, and from the Tama madness; distraction, and ignorance. Those of the Sattva Guṇa mount on high, those of the Rajas stay in the middle, while those abject followers of the Tama-Guṇa sink below.
When he who beholdeth perceiveth no other agent than these qualities, and discovereth that there is a being superior to them, he at length findeth my nature; and when the soul has surpassed these three qualities, which are co-existent with the body, it is delivered from birth and death, old-age and pain, and drinketh of the water of immortality.
ARJUN.
By what tokens is it known that a man hath surpassed these three qualities? What is his practice? What are the means by which he overcometh them.. 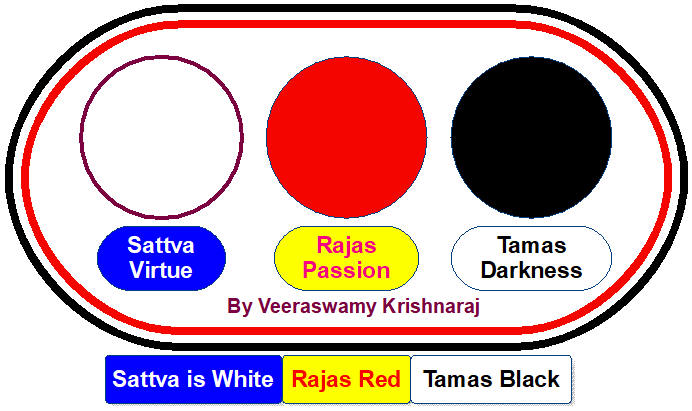 KRISHNA.
He, O son of Pāndu, who despiseth not the light of wisdom, the attention to worldly things, and the distrac­
tion of thought when they come upon him, nor longeth for them when they disappear; who, like one who is of no party, fitteth unagitated by the three qualities; who, whilst the qualities are present, findeth still and moveth not; who is self-dependent and the same in ease and pain and to whom iron, stone, and gold are as one; firm alike in love and dislike, and the same whether praised or blamed; the same in honor and disgrace; the fame on the part of the friend and the foe, and who forfaketh all enterprise; such a one hath surmounted the influence of the qualities. And he, my servant, who serveth me alone with due attention, having overcome the influence of the qualities, is· formed to be absorbed in Brahman, the Supreme. I am the emblem of the immortal, and of the incorruptible; of the eternal; of justice, and of endless bliss.