Devipuram: This article and images are from the web site: www.Devipuram.com

There are three types of people: Pasu, Vira and Divya. Guruji belongs to Divya class of people. 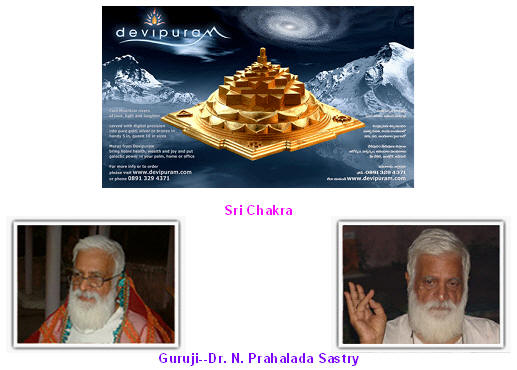 How about spending a day at Devipuram – a small village housing the world’s largest Srichakra? It was built under the guidance of the Divine Mother by a modern-day Seer, Sri Annapoornamba Sameta Sri Amritananda Natha Saraswathy. People fondly refer to him as “Guruji.”

Who is Guruji? He is a scientist, a perfectionist of the first order, a walking encyclopedia, an authority on Srividya and Tantra and, above all, a brahma nishta, carrying those who take refuge at his feet to that great source, the Sarva Yoni.

Ask him how an aircraft’s landing gear works, and you’ll get an answer detailed down to the last nut and bolt. Ask him about practical applications of the Fourier Transform in mathematics, and he’ll explain it to you. Ask him about the deepest significance of Maha Shodashi Mantra, and he’ll draw a few diagrams and explain that to you too, as if you were a kid in first grade and he was your mother teaching you addition and subtraction – only now the subject concerns the Universes and Galaxies.

Guruji (Dr. N. Prahalada Sastry) was born in Vishakapatnam, Andhra Pradesh, the first child of Sri Narasimha Rao and Srimati Lakshminarasamma. He began his spiritual quest at a very young age. Having been blessed with divine experiences early in his childhood, his young mind was teeming with questions, searching for the truth. The stage was set for the spiritual inclination that was to intensify later in his life.

In the course of time, Guruji’s interest turned to science. He graduated from the Andhra University with a master’s degree in Nuclear Physics, and received his doctorate from the University of Bombay while working at the Tata Institute of Fundamental Research. Guruji spent 23 years involved in research at TIFR. In his final few years there, he was working on an air defense project – but his spiritually inclined conscience was not comfortable with the destructive nature of the research.

t was during this time, in 1977, that Guruji – his mind in search of the truth within himself – visited the Balaji temple in Hyderabad. As he went and prostrated before the Lord, he felt an extreme thrill pass through his body; Guruji had received his first initiation from Balaji Herself – that is, Bala-Tripurasundari. This proved to be the turning-point in his life. After deep thought, Guruji decided to immerse himself more deeply into spiritual matters, while also devoting time to work for the uplift of society. He received Sri Vidya Poorna Dhiksha from Sri Swaprakashananda Natha Thirtha Avadhutha of Anakapalli; showered by the Grace of Devi Saraswathi, he was given the diksha name of Amrita.

At this juncture, Guruji was offered a position as Professor of Physics at Lusaka University in Zambia. Recognizing this as an opportunity to take a fresh look at himself, he accepted a two-year contract there. While in Zambia, Guruji met his "spiritual son," Sri Wijayaharan (today widely known as Aiya, of the Sri Rajarajeswari Temple in Rush, N.Y.) and accepted him as his disciple in SriVidya upasana. Guruji returned to India in 1981, resigned from TIFR and settled in Vishakapatnam, devoting himself to SriVidya upasana and worship of the Devi. Simultaneously, he began developing means to help improve the standard of living of his fellow humanity.

In 1983, during a Devi Yagna, Guruji was approached by the brothers of the Putrevu family, who donated three acres of land with a request to build a temple for the Divine Mother there. Guruji bought the adjoining ten acres and registered it as land for a Devi temple. Having done so, he sought divine guidance; a sign of approval to commence construction of the temple.

In the vicinity of the donated land, there was a small hillock where Guruji would often spend time in meditation. On the slopes of that hillock, he noticed a formation very similar to that of the Kamakhya Peetam in Assam. One day while in meditation there, he experienced himself lying on the Peetam, while four others performed a homam with the flames emanating from his body. During purnahuthi, he felt a heavy object being placed on his heart. Awakening from this meditative state, Guruji was prompted to dig that very site – and there he unearthed a Sri Chakra Mahameru made of panchaloha. It was later discovered that a huge yagna had been performed there more than 250 years ago.

During this time, Guruji had a series of visions of the Devi as a 16-year-old girl. With Her blessings, he built the Kamakhya Peetam on the hillock and a Siva temple on the peak in 1984. Construction of the Sri Meru Nilaya in Devipuram began in 1985. Covering an area of 108 square feet, the temple has three levels and stands 54 feet high. Inside are idols of all the Devis described in the Devi Khadgamala Stotra. Temple construction was completed in 1994, and the kumbhabhishekam celebrated with great pomp and piety.

This temple is unique in allowing the devotees to perform puja to the Devi themselves, without distinction of caste or creed. With numerous loving disciples all over the world, Guruji and his wife, Srimati Annapurnamba (lovingly known as Guruji Amma), have dedicated their lives to the service of the people; and have established the Sri Vidya Trust to institutionalize and further this noble purpose. 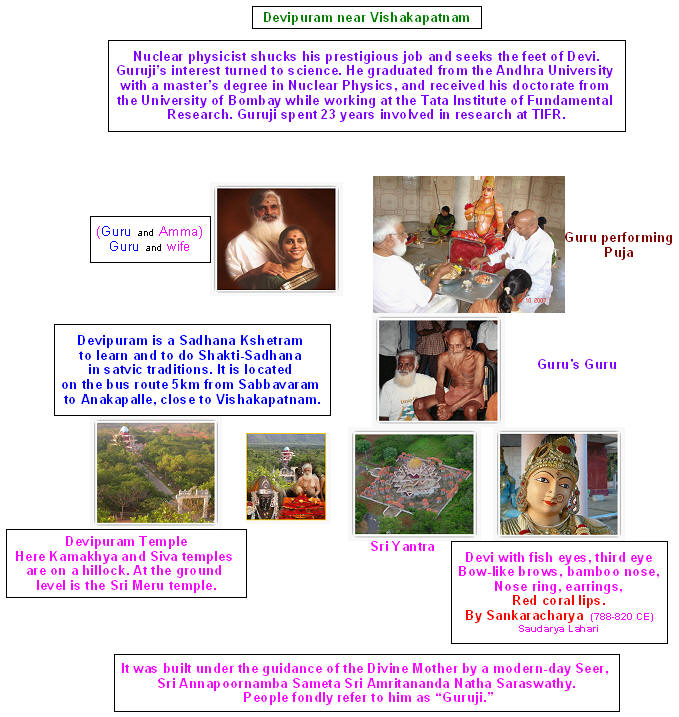