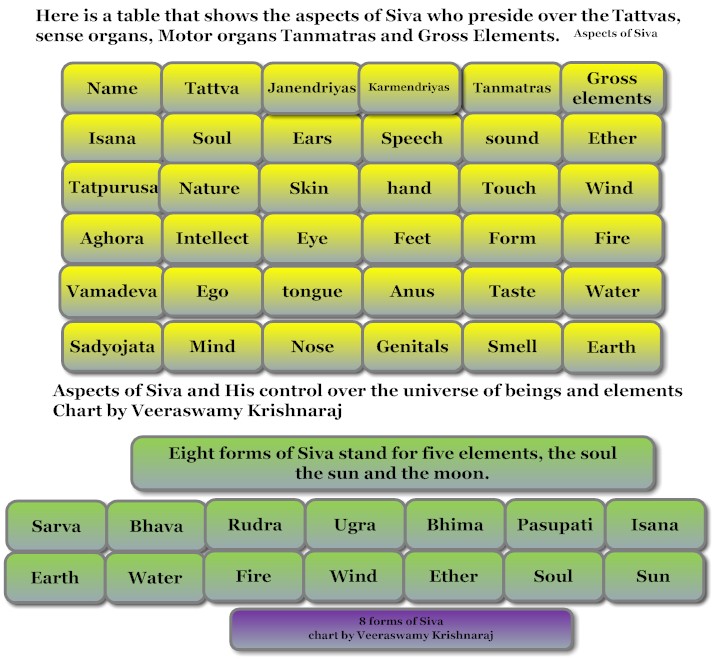 Some texts give variation in Astamurti: the five elements, the sun, the moon and the sacrificer in the place of soul.

All these paths remove only Karma Mala and Maya Mala, but not Anava Mala, which is removed by God alone by conferment of Grace.

Sivapurana, chapter forty-one, describes four types of liberation:  Salokya, Saannidya (Samipa), Saruupya, and Saayujya. Liberation is the exclusive right of Siva and no  other gods. Others are authorized to confer virtue, wealth and love. Siva is beyond attributes, devoid of aberrations, the Great Brahman and above Prakrti. He is immutable, imperishable, full of knowledge and a cosmic witness attainable through spiritual knowledge. He awards trivarga, Dharma, Artha, and Kama in this world and Kaivalya liberation in the other world. Kaivalya is splendid isolation from matter and impurities and freedom from transmigration. Siva has two forms: Nirguna and Saguna. Nirguna form is the originator, pervader, maintainer and destroyer of the universe. Nirguna state of Siva is not known to any god, rishi, muni, sastras, and Vedas. It is Truth, Knowledge, Infinity and Nirguna Nirviyaadi. Nir + Vyaadhi = no disease, limitation, condition.); it is pure, unstained and imperishable. The only condition he is susceptible and subservient to is worship.

Siva existed before creation, during maintenance, and after dissolution; when everything is void, he is Sadasiva. He is Mahakala associating with Mahakali. He has no progenitor, maintainer or annihilator; he is the cause of all including Brahma and Vishnu. All that is in the universe from a blade of grass to Brahma is Siva.

Here is another variation/corollary of paths in attaining to Siva   These four Saiva saints are generally called Naalvar, the Foursome.

Sundarar (end of seventh and beginning of eighth century C.E.)  (Vanthondar = Van +Thondar = hard + devotee, as slave of God), (persons who are slaves to worldly pleasures)  was bestowed the high privilege of being a friend or companion (Sakha Marga) by Lord Siva Himself. Sakha Marga is described as immersion in contemplation, controlling of five senses, blocking and stilling the Ida and Pingala breaths, taking Kundali Sakti from Muladhara to Sahasrara Chakra, enjoying the nectar from the sphere of Moon within the cranial cavity and saving it in the body. Sakha Marga confers Sarupya Mukti, likeness of Siva. The legend says that Siva saw himself in the mirror and the image morphed into Sundarar in real life on earth.

The relationship between Sundarar and Lord Siva was so informal and friendly that they gave each other a sobriquet; Siva called Sundarar Vanthondar, rowdy (hard) devotee, and Sundarar called Siva, Pitthan (The Crazy One). Sundarar married first time a Brahmin girl, Paravaiyar and second time a Vellala girl Sangiliar. The story goes that he was brought up in royal household, when the king took a liking for him. AS far as his wives are concerned, the legend goes like this: Sundarar was living in Kailas in close proximity and servitude to Lord Siva. That gave him inordinate pride. Two of Parvati's maids and he developed a mutual attraction, which Siva did not like and so sent them to earth to purify themselves and attain liberation. Those celestial maids became his earthly wives, Paravai and Sangili.

Siva called him Vanthondar because Sundarar was a devotee not in the ordinary sense. He married twice; he demanded and received gold from Siva many times; when he became blind in both eyes from some unknown cause, he was bitter and demanded Siva to restore his eyesight, which Siva did; he made Siva to broker reconciliation between him and his first wife, Paravaiyar, when he took Sangiliar as his second wife; Siva had to beg for food to feed blind Vanthondar.

Previously, Sundarar's Grandfather signed a document which made him and his progeny  slaves of an old man.  Sundarar recognized the signature of his grandfather in the document. The old man took Sundarar into the local temple and disappeared; he felt the descent of divinity into him and had a vision of Sundaresvar in the form of Siva and Parvati on a bull with their two sons, Ganesa and Kartikeya. He, then fourteen years of age, came out shouting, "I am thy slave." Siva asked him to sing songs of adulation and worship. Because Siva made Sundarar his slave, it fell upon Siva to upkeep his slave and meet his "needs." Siva makes his devotees His slaves first and later becomes the slave of the devotees; there is no way that Siva can sit idly by without catering to the needs of his devotees.  The fusion of the historical and the metaphysical brings us to a conclusion that we are all slaves of the Lord; He owns us lock, stock, and barrel. Sundarar at the behest of Siva wrote poems on the devotees of Siva (Thirththondarthogai = Tiru-Thondar-Thogai = Holiness + Devotee + anthology.

Sundaramurthy Swami was the companion of God.

According to Sekkizhar, Sundarar was in Nandavanam in heaven, where Uma Devi, consort of Siva and her companions go for gathering flowers and to have a good time. Sundarar was one of the visitors and cast his eyes on two maidens: Aninthai and Kamalini. This mental attitude of Sundarar was predestined by Siva who wanted him to take birth on earth to spread Saiva religion, perform necessary selfless services and uplift humanity. Siva having noticed the passionate glances of Sundarar ordered him to take birth on earth in South India, enjoy the carnal pleasures and return back to him. The implication is that heaven is not a place for sensual pleasures; earth is the place for sex. Sundarar was in pain at the prospect of the descent to earth because he would be leaving the sacred feet of Siva and appear as the enjoyer of ephemeral pleasures of the flesh on earth. He felt like a straw man with flimsy pursuits. Thus, the trio, Sundarar, the willing Aninthai and Kamalini took birth on earth to carry out Siva's wishes. Verses 33 to 39 Periya Puranam by Sekkizhar.

Nāyaki (Uma Devi, Parvati) has won over us  a while ago. To pluck worthy flowers to adorn her honey-fragrant coiffure, beautiful maids equal in splendor to the moon went to Nandavanam (flower garden).

Aninthai with imperishable great beauty and Kamalini wearing a fragrant flower garland arrived at the flower garden to gather cluster flowers. It happened to be the will and Grace of Isan (Master or Lord) of welkin dwellers.

The south is known for great austerity and great Saiva tradition.  Karma-free AlAlasundar  to compose Thiruth-Thondar Tokai (panegyric poems) on the earth let his mind dwell on the celestial maids, who on knowing the loving glances of AlAlasundar exulted at the prospects.

AlAlasundar left after gathering from the flower garden cluster flowers from among the buds which are worthy of offering to His Ruler, Isan. The maids sporting swan-like gait left the garden after gathering blossoms for the Lord.

AadhiMurthy (Siva) having noticed his act told AlAlasundar, " You cast your loving glances on the maids. You will incarnate on this earth in the South (South India), enjoy marital bliss with the tender-natured women and later come back to Me.

AalAlasundar joined his palms together (in reverence) and said in agitation, " I became a mean vulgar person, having to leave your lotus feet.  When I assume the form of man on earth and suffer mental delusion (spiritual ignorance), please forestall (any Karmic inflows), rule and guide me and grant your Arul (Grace).

Siva with the eyes of Grace granted Grace to  Nambhi (Aalalasundar), ordered him, Aninthai, and Kamalini to take birth in the South and enjoy (marital) bliss.  So said Upamanniya Muni of the antecedent history of the trio.

Thiru-Gnana-Sambandar was the son of God, because as a three year old child-saint-poet he imbibed the milk of Uma in a golden bowl fortified with Siva Gnanam (Siva's Wisdom or gnosis). Sambandar (Real-life Child) single-handedly uprooted Jainism from Pandiya kingdom by performing feats and miracles in competition with established Jain monks. He cured the Jain king of his hyperpyrexic illness by applying sacred ash to his body; his palm-leaf of devotional songs floated while those of the Jain monks were carried away to the sea, and resisted fire while those of monks were rendered into ashes; he brought back a dead girl from the ashes in the urn. Along with the Jain monks, the Buddhist monks were soundly routed in debates by the child-saint. The glory days of Jainism and Buddhism were beginning to fade into oblivion. Tamil people are indebted to Jains for Tamil works like Cilapathikaram, Civakacintamani, and Nanool Grammar. Sambandar died as a teenager. The storyline goes like this. At his wedding, Siva appeared as a column of fire (think of fiery Lingam), invited him, his bride and all the attendees to be licked by the tongues of fire and swallowed by the ball of fire.

Appar (Sometime between C.E.570 and 670), the rich landlord of Vallala peasant caste, was a devotee of Siva; he, later as an young man, joined Jain Monastery, became Dharmasenar, Abbot, and stayed for about twenty-five years in the monastery in the kingdom of Pallavas. He developed abdominal colic, which the Jain Monks could not cure. He went to his sister secretly, later to Siva's temple and received cure from Siva. The king on the instigation of the Jain Monks put Appar through torture. He was put in a kiln for seven days, which he survived. He was given poison to drink, which he survived. An elephant, sent to trample him, paid him tributes with his trunk and bent knees and went ahead trampling the Monks down under its feet. He was later tied to a stone and cast in the sea. He survived all this and lived to a ripe old age. His facility with words earned him the title "Tirunavukkuarasar" (The saintly king of tongue--words, speech). He met Sambandar, child-saint-poet, who gave him a sobriquet, "Appar", meaning father.

It is not uncommon for Siva's votary to use apparently insulting words towards Siva in love, devotion and poetry. Siva wanders around with begging bowl which sometimes reeks foul from rotting food.  Benagali poet, DAsarathi Ray, (1804-1857) writes in his song on Siva as follows. This is a quote from Principles of Tantra Part II, page 322 by Sir John Woodroffe.

O Isvari Annapurne, who can say that Hara is a beggar,

when Kubera is the door-keeper in His house? The three

worlds are beggars at the door of Thy three-eyed beggar.

Hara is Siva and his third eye is the eye of wisdom and destruction.  Isvari = Mistress of the universe, that is PArvati, consort of Siva. AnnapUrne = food giver.

She is the Mother Goddess of Vishnu, Brahma and Rudra, the synthetic form of three qualities responsible for creation, maintenance and dissolution of the universe.   Motilal Banarsidass publishers, Siva Purana Translation by Prof. Shastri. 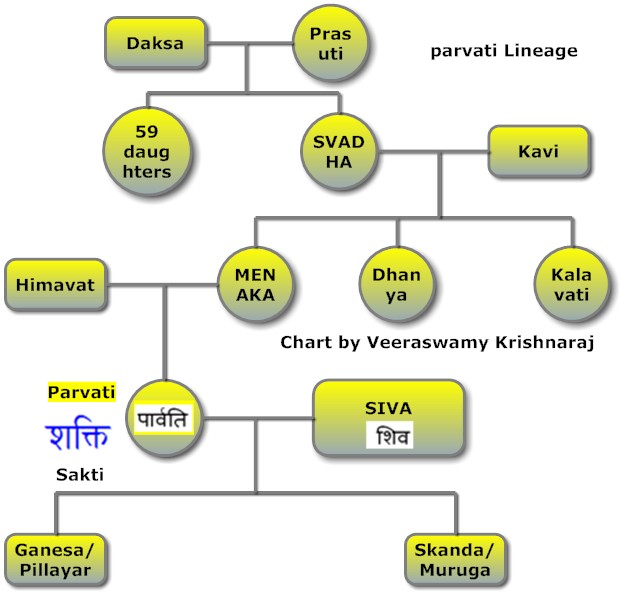