The Bhagavad-Gītā
Or
Dialogues of Krishna and Arjuna

TRANSLATED FROM THE ORIGINAL

IN THE ANCIENT LANGUAGE OF THE BRAHMAN

OF THE FORSAKING OF WORK.

OF FORSAKING THE FRUITS OF WORKS.

[ 57 ]
ARJUNA
THOU now speakest, O Krishna, of the forsaking of works, and now again of performing them. Tell me positively which of the two is best (sic).
KRISHNA
Both the desertion and the practice of works are equally the means of extreme happiness; but of the two the practice of works is to be distinguished above the desertion. The perpetual recluse, who neither longeth nor complaineth, is worthy to be known. Such a one is free from duplicity, and is happily freed from the bond of action. Children only, and not the learned, speak of the speculative and the practical doctrines as two. They are but one, for both obtain the self-fame end, and the place which is gained by the followers of the one, is gained by the. followers of the other. That man seeth, who seeth that the speculative doctrines and the practical are but one. To be a Saṁnyāsi, or recluse, without application, is to obtain pain and trouble; whilst the Muni,


[ 58 ]
who is employed in the practice of his duty, presently obtaineth Braḥman, the Almighty, The man who, employed in the practice of works, is of a purified soul, a subdued spirit and restrained passions, and whose soul is the universal soul,. is not affected by so being. The attentive man, who is acquainted with the principles of things, in feeing, hearing, touching, smelling, eating, moving, sleeping, breathing, talking quitting, taking, opening, and closing his eyes, thinketh that he doeth nothing; but that the faculties are only employed in their several objects. The man who, performing the duties of life, and quitting all interest in them, placeth them upon Braḥman, the Supreme is not tainted by sin; but remaineth like the leaf of the lotus unaffected by the waters. Practical men, who perform the offices of life but with their bodies, their minds, their understandings, and their senses, and forsake the consequence for the purification of their souls; and, although employed, forsake the fruit of action, obtain infinite happiness; whilst the man who is unemployed, being attached to, the fruit by the agent desire is in the bonds of confinement. The man who, hath his passions in subjection, and with his mind forsaketh all works, his soul fitteth at rest in the nine-gate city of its abode, neither acting nor causing to act.


[ 59 ]
The Almighty createth neither the powers nor the deeds of mankind, nor the application of the fruits of action : nature prevaileth. The Almighty receiveth neither the vices nor the virtues of any one. Mankind are led astray by their reasons being obscured by ignorance; but when that ignorance of their souls is destroyed by the force of reason, their wisdom shineth forth again with the glory of the sun, and causcth the Deity to appear. Those whose understandings are in him, whose souls are in him, whose confidence is in him, and whose asylum is in him, are by wisdom purified from all their offences, and go from whence they shall never return.
The learned behold him alike in the reverend Braḥman perfected in knowledge, in the ox, in the elephant, in the dog, and in him who eateth of the flesh of dogs. (See below bg05.h1.jpg) Those whose minds are fixed on the equality, gain eternity even in this world. They put their trust in Braḥm,, the eternal, because he is every where alike, free from fault. 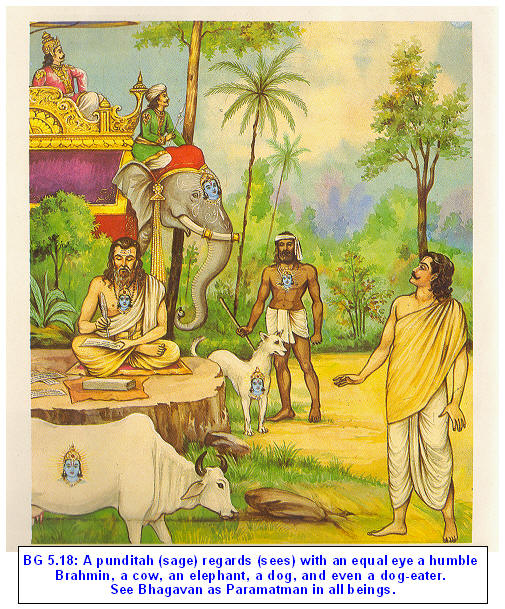 The man who knoweth Braḥm and confideth in Braḥm, and whose mind is steady and free from folly, should neither. rejoice in prosperity, nor complain in adversity. He whose soul is unaffected by the impressions


[ 6O ]
made upon the outward feelings, obtaineth what is pleasure in his own mind. Such an one, whose soul is thus fixed upon the study of Brahm, enjoyeth pleasure without decline. The enjoyments which proceed from the feelings are as the wombs of future pain. The wise man, who is acquainted with the beginning and the end of things, delighteth not in these. He who can bear up against the violence which is produced from lust and anger in this mortal life, is properly employed and a happy man. The man who is happy in his heart, at rest in his mind, and enlightened within, is a Yogi, or, one devoted to God, and of a godly spirit; and obtaineth the immaterial na­
ture of Brahm, the Supreme. Such Ṛṣis as are purified from their offences, freed from doubt, of subdued minds, and interefted in the good of all mankind; obtain the incorporeal Brahm. The incorporeal Brahm is pre­ pared, from the beginning, for such as are free from lust and anger, of humble minds and subdued spirits, and who are acquainted with their own souls.
The man who keepeth the outward accidents from entering his mind, and his eyes fixed in contemplation between his brows; who maketh· the breath to pass through both his nostrils alike in expiration and inspiration;

[ 61 ]
who is of subdued faculties, mind, and understanding, and hath set his heart upon salvation; and who is free from lust, fear, and anger, is forever blessed in this life; and, being convinced that I am the cherisher of religious zeal, the lord of all worlds, and the friend of all nature, he shall obtain me and be blessed.